Thanks so much to Michael Poteet at Bauman Rare Books in Philadelphia for bringing this neo-Latin author to my attention! Carolus (Charles) Lebeau (also Le Beau) was born in Paris in 1701 and died in 1778 after a distinguished career as a teacher, scholar and author; you can read more about his career in the French Wikipedia entry. After his death, it was discovered that he had left behind a considerable quantity of Latin manuscripts which were edited and published in 1782-1783 as follows: I Carmina (poems from Bible history, secular history, fables, along with some miscellaneous poems); II Fabulae, Narrationes, Orationes, et Loci Communes (all these items are in prose); III Orationes et Oratiunculae. There is also a supplemental appendix published in 1816, Novum Supplementum, containing additional materials that did not get included in the first three volumes. Finally, there is a study entitled Parallèle curieux des Fables en vers latins de M. Lebeau, published in 1785, which sounds like a fascinating source study of the Greek, Latin and French fables that Lebeau drew upon as he created his Latin fables in verse and prose.

While there is no Parallèle curieux at GoogleBooks, WITH HELP (see comment below), I was able to find these volumes of Lebeau's works available at Google Books! In what free time I can find, I will be transcribing materials from these books here: Google Books - Leabeau.
Alas, I have to go back to work on Monday... so this is a joyful end-of-summer discovery, but I do not know when I will have time to start transcribing stories from this treasure trove. For those of you interested in neo-Latin authors, this is absolutely worth taking a look at. Many thanks to Michael Poteet for letting me know about Lebeau and to Patruus for helping me navigate the murky depths of Google Books! I thought I had scoured Google Books thoroughly last summer for all the neo-Latin Aesop by French authors, but I missed Monsieur Lebeau completely... which just goes to show: I will never run out of things to do with Aesop in Latin - much less all the Aesop in other languages! :-) 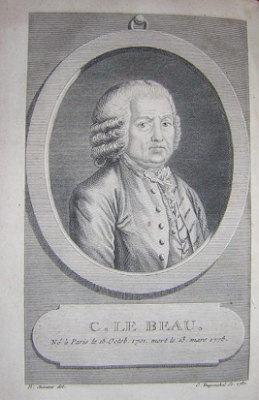 Email ThisBlogThis!Share to TwitterShare to FacebookShare to Pinterest
Labels: Lebeau